Mosquitos might be Wisconsin’s unofficial state pest with the itchy bumps they leave with each sting, but ticks pose a serious threat to your health if they latch on to you.

Tick-borne illnesses are becoming more common across Wisconsin. Fortunately, medical research has led to quicker and improved diagnoses that help patients get proper treatment and return to better health sooner.

Care My Way® may be able to help prevent Lyme disease if you do have a tick bite. Download the app to get started.

Ticks at home in the midwest

Wisconsin is home to at least 16 species of ticks, but it’s just a couple of known species that prey on humans and are disease carriers.

“We are in the Midwest epicenter for Lyme disease, anaplasmosis and babesiosis,” said Marshfield Clinic Pathologist Dr. Tom Fritsche.

The culprit that transmits each of these diseases is Ixodes scapularis, known as blacklegged or deer tick. The critter is no larger than a sesame seed as a juvenile and only slightly bigger as an adult. Males are all black while females are dark brown to reddish-orange in color with a dark patch on their upper bodies.

Ticks are on the move from spring until autumn. Hikers, hunters and farmers are at the highest risk as they brush up against vegetation where ticks reside.

Marshfield Clinic researchers are working with state and federal authorities to learn more about tick habitat, and spread of tick-borne diseases.

Cases of Lyme as well as anaplasmosis and babesiosis are increasing as the tick moves from west to east across Wisconsin. Changes in forestry practices, and increases in deer and white-footed mouse populations, which host the ticks, also have led to the illnesses’ increasing prevalence.

How do you know if you are infected?

When a tick bites it can potentially transmit disease through its saliva. A person bitten by a deer tick might not see symptoms for several weeks, and even then the symptoms might be dismissed. 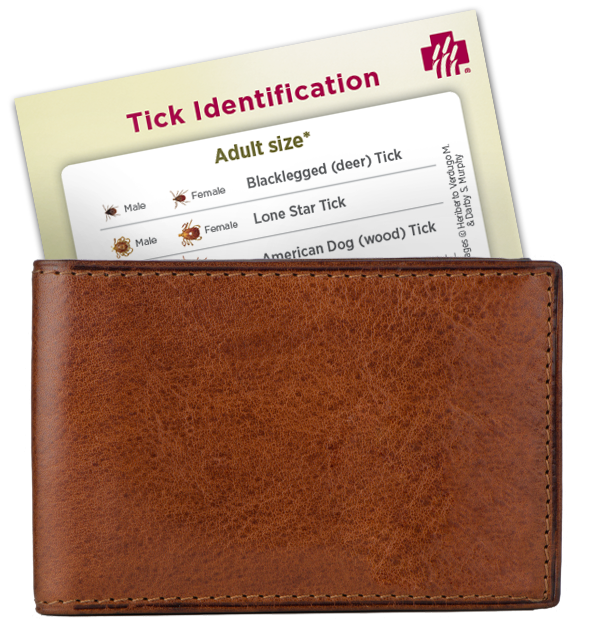 Clinic providers can order a test that can detect DNA of an infection.

“Symptoms, which include acute fever, are very similar to those of influenza,” said Marshfield Clinic physician and infectious disease researcher Dr. Matt Hall. “For providers seeing a patient, if they have these symptoms in winter, they’ll suspect it’s flu. In summer, it’s quite possibly anaplasmosis.”

Use common sense to protect yourself

Reducing your exposure to ticks is the only way to avoid tick-borne diseases. Learn ways to protect you, your family and pets while hiking, hunting, doing yard work or farming. Download our printable tick card.